VCA Forging Ahead With REVIT

VanDorpe Chou Associates has obtained building department approval on the first fully REVIT wood frame structural plans in Southern California. Bill Allen, Senior Project Manager for VCA, indicated “our Revit vendor confirmed that this is the first wood-frame project he is aware of that had the structural design plans using REVIT.” Although VCA has been involved with base plans generated from 3-D architectural modeling software for years, it wasn’t until recently that the structural plans were fully converted to the REVIT platform.

REVIT is a 3-D modeling software that constructs a virtual building rather than using the conventional 2-D plan representations used in traditional drawings. The 3-D model has the advantage of allowing designers to look at the finished structure rather than imagining what the various finished surfaces and connections will look like. It is great for coordinating utilities lines and penetrations with structural members. Conflicts can be automatically flagged early in the design phase which can potentially save construction time. In addition, there are versions of REVIT available for structural engineers and MEP engineers that allows for some parts of the design to be automated. Accordingly, the management of changes during the design phase can become part of a documented process, rather than relying solely upon the experience and diligence of the design engineer. Another advantage is that a bill of materials can be automatically generated from a BIM model which indicates exact material quantities 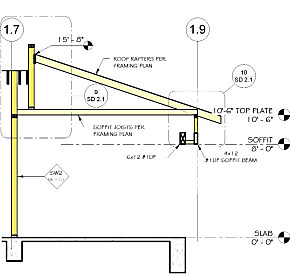