As many of you are aware, the adoption of the IBC created a stir when word spread that the traditional anchor bolt has less than ¼ of the value prescribed in the earlier codes. This applies when the bolts are used to anchor exterior shear-walls from seismic loads. Surprisingly, the reductions did not apply if the force came from wind, rather than seismic loading. Some builders were frustrated when building departments started to enforce these new provisions. Likewise, engineers were baffled to hear that some code listed double-sided shearwalls suddenly required more anchor bolts than would physically fit. These reductions appeared unwarranted to those deeply involved in light-frame construction.

The problem stems from the complex ACI “Appendix D” provisions brought in by the IBC which are applicable to anchor bolts resisting seismic loads. The resultant new procedure replaced the simple table of bolt capacities used for the past 30 years and instead provided a set of formulas which use about a dozen variables. Using the new procedure, engineers and plancheckers were calculating values that required 4 or 5 times more anchor bolts. Amid the confusion, enforcement has not been uniform. Last year, VCA Engineers joined a small group of proactive engineers that confronted this situation on behalf of our industry. A rigorous test program was created. Anchor bolts were tested in concrete with wood sill plates in a volunteer led effort valued at $200,000. The results of the test program were co-presented by Tom VanDorpe last month to a standing room-only gathering of structural engineers at the SEAOC annual convention in SanDiego. The complete test report can be found by clicking here. Several code change proposals have been submitted based upon this research that justifies anchor bolt values in line with traditional values.

For current projects, it is important that your structural engineer be aware of the limited scope of this research in order to base designs upon correct and usable anchor bolt values. For example, the research did not include ¾” or 7/8″ diameter anchor bolts, or attachment of a cold-formed steel bottom track. Since the Building Code now mandates the use of ACI Appendix D, traditional anchor bolt values need to be justified by the engineer through the new code regulations. VCA’s participation with this test group has provided us detailed knowledge on this subject which is necessary to approximate the familiar, traditional anchor bolt schedules. For more information, please contact Tom VanDorpe, SE. 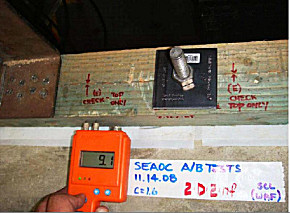